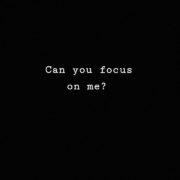 H.E.R made a song called “Can you focus on me”. I must say from the beat, tempo, lyrics the song is a good vibe right? I was sitting listening to this song and behold God speaks in the midst! I started laughing like GOD you have a great sense of humor but I hear you. I really was like Lord I will definitely deliver the message to your people. Throughout the song, the artist is expressing her need for attention and affection from her partner. She is trying to relay the message of needing more from the relationship. She is feeling pushed off, neglected, and just she has had enough! All she wants is the focus to be on her!
Well now that I’ve basically summarized the 3 minute and 20-second song it’s safe to say that GOD is asking simply asking one question ” Can you focus on me?” Yeap, you read it right. Here we are in this pandemic quarantining and have nothing but time on our hands.  Before this pandemic began how much time did you really spend with GOD? You need to answer it honestly! We’ve had all the excuses in the world as to why we couldn’t do this or that. But the biggest excuse was ” I DON’T HAVE THE TIME”. God has put a pause on everything just to ask ” Can you focus on me?” You have more than enough time now to get back to the place you should be in.

In the lyrics, the artist speaks of how the person was stuck on their phone and stuck their zone-How relatable is this? We are constantly stuck staring and tapping on the phone screen. Most of the time we’re so focused on social media sites, games, Netflix and so on we become zoned out to everything else! Now that God has brought us to a pause he is asking us to put down the phones and pick up the bibles!  He is looking for you to open up your line of communication with him. You don’t need a phone to reach him, but you can begin to meditate and pray to him. God is listening and wants to hear from you! He’s asking ” Can you focus on me?”

She then goes on to say that person doesn’t have a clue and she doesn’t want to give up, she wants them to get up because she’s becoming fed up! She wishes they would just focus on her!- God is trying to relay the same message. We’re always looking for God to speak and come through for us but if he did sometimes we wouldn’t even have a clue! Why because we’re so distracted by everything else that we can’t even recognize the fact that he’s trying to get our attention! But like the artist says she doesn’t want to give up! God doesn’t want to give up on you either!  God wants you to GET UP! He has become FED UP with the way we have brushed him to the side and put everything over him! Look at how God thought enough of you to put a pause on everything.  He may have temporarily caused a lay off to happen, slowed down your income but you’ve probably saved money. Now you don’t have the luxury of spending on unnecessary things. He has allowed things to take place so you can focus on HIM! He hasn’t stopped providing for you! There are still resources for food, income and to help you keep yourself afloat. But he did cause you to have to turn to him. It’s not all that bad. But he’s become fed up with the one-sided relationship and wants to see your effort!

In the next set of lyrics, the artist expressed that she feels alone even when they’re alone! Then she says but that doesn’t cost a thing!- Whew, chile! That’s a lonely space! But guess what God feels the same way! You get alone time with him and still don’t utilize it to draw closer to him.  God is desiring to hear from you, he is always present but you still choose to occupy your time with other things. You allow distractions to take you away from his presence. Time doesn’t cost a thing when you’re spending it with GOD. So as we have come to a pause what are you focusing on?? God is looking for you to use this time wisely and come back to him. To seek him like never before! He wants to speak to you, give you direction, and have his way in your life.

As the artist ends the song she asks two questions ” Can you focus on me?” Can’t you see? and then says I just want to love you, look me in my eyes!- Now let’s bring this to what God is saying to us

GOD- Can you focus on me? ( He wants your undivided attention)

GOD- Can’t you see? ( I have created a PAUSE so that you can START again)

GOD- I just want to love you( GOD wants to love on you, he wants a more intimate relationship, he wants to show you he cares for you)

God is so amazing that he would use an R & B song to minister in a spiritual way. How is that? When you are aligned with God and in close relationship with him, even in the midst of your normal activities he will allow you to hear the message he is trying to relay to you. Not all messages from God are theological and churchy! God knows how to reach us all! So take heed and use this time to get back in position!

Want to join the discussion?
Feel free to contribute!

TUCK THEM IN! I can weather the STORM!
Scroll to top